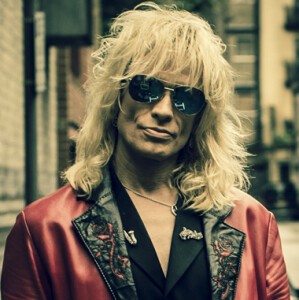 The new album is called Blackout States and it‚Äôs in the can, slated for release via Spinefarm/Universal in the autumn of 2015. It was recorded in March under the guidance of producer Chips Kiesbye in Gothenburg. Chips is, of course, known for his work with Nomads, Sator, The Hellacopters and many others.

Monroe‚Äôs newest batch of songs is hard-hitting and honors tradition while searching for some new kick-ass ingredients to mix into the primordial rock‚Äėn‚Äôroll stew. The band gives the more melodic material a punky attitude that the songs wear with style.

The beating heart of the group consists of bassist Sami Yaffa and drummer Karl Rockfist. Sami and Michael go way back, to the 1980s ‚Äď Sami played bass in Hanoi Rocks, launched Demolition 23 with Michael and started cult band Mad Juana in Spain in the 1990s, before going on to play in the reformed New York Dolls, as well as with Joan Jett and the Blackhearts this millennium. Karl has pounded the skins behind stars like Glenn Danzig and Joan Osborne.

The band‚Äôs six-string bite comes from new kid on the block Rich Jones and stalwart member Steve Conte. Rich, formerly of The Ginger Wildheart Band and The Black Halos, is as volatile a guitarist as Monroe has ever worked with. He‚Äôs been playing with the group since the summer of 2013. The kick he gave the Monroe rock‚Äėn‚Äôroll cocktail was potent enough for him to be invited on board as a full and permanent member.

Steve Conte started his career at the age of 11, making his first album in the family living room and backing his jazz singer mom at venues in New York and New Jersey. Since then, he‚Äôs led his own bands The Crazy Truth and Company Of Wolves, and provided the rhythmic backbone and tasty leads for artists such as Suzi Quatro, Willy DeVille and Eric Burdon. He was also the man called upon to fill the sizable void left by Johnny Thunders in the reformed New York Dolls in 2004.

The band‚Äôs namesake singing and sax-playing whirling dervish of rock‚Äėn‚Äôroll abandon is, of course, the legendary Michael Monroe. His place in history was sealed with Hanoi Rocks, but he has never been one to rest on his laurels. In short, he just kept getting better. There is no half-stepping in Monroe‚Äôs world, and Blackout States keeps building on his formidable strengths.

Monroe‚Äôs last two releases ‚Äď the aforementioned Horns And Halos and 2011‚Äôs Sensory Overdrive ‚Äď were both critical and commercial successes, with the latter winning Classic Rock magazine‚Äôs ‚ÄėAlbum Of The Year‚Äô award.
Blackout States arrives on a wave of anticipation and the 13 new recordings will undoubtedly leave existing fans comprehensively rocked, while providing a perfect point of entry for any novice wishing to experience the heady and lasting delights of prime rock‚Äėn‚Äôroll in the raw.