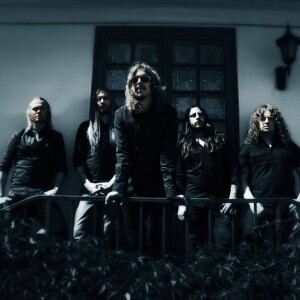 An unstoppable force for uniqueness amid a sea of generic swill, Opeth have been setting the rulebook ablaze and ploughing a uniquely progressive and exploratory furrow for nearly 25 years now. Formed in Stockholm in 1990, the band led by singer, guitarist and songwriter Mikael √Ökerfeldt began life as maverick and honorary members of the then flourishing Swedish death metal scene, but from their earliest recordings onwards this band have neither conformed nor exhibited any desire to be restricted to a single genre. Displaying a relentless lust for evolutionary motion, Opeth‚Äôs first three albums ‚Äď Orchid 1995, Morningrise (1996) and My Arms, Your Hearse (1998) - set the band firmly apart from everything else that was happening in metal during the 90s. Instinctively brave and effortlessly mysterious, these were groundbreaking records that could be superficially described as ‚Äėprogressive death metal‚Äô, but which were plainly much more than that: a singular expression of a profound love for music in its bewildering entirety that served the band extremely well over the decades that followed. By the time Opeth released Still Life in 1999 (prompting a spiritual and professional bond with prog icon Steven Wilson that survives to this day) they were simply in a class of their own, taking metal into uncharted territory as a matter of habit as they skilfully weaved all manner of disparate influences into their unmistakable trademark sound.

An instant classic that has gone on to become one of the most revered albums in recent history, 2001‚Äôs Blackwater Park proved to be a decisive moment in Opeth‚Äôs career, leading them to a succession of extensive tours around the globe and ensuring that the band were universally hailed as something very special indeed. With √Ökerfeldt‚Äôs musical vision and refusal to kow-tow to current trends propelling them breathlessly forward, the band moved on through the two-headed derring-do of 2002‚Äôs Deliverance (winner of the 2003 Swedish Grammy award for Best Hard Rock Performance)and its startlingly mellow and pointedly non-metallic follow-up Damnation (2003), enhancing their credentials as true inheritors of progressive rock‚Äôs restless spirit along the way. Perfecting their established sound on 2005‚Äôs Ghost Reveries and bending it into warped and disturbing shapes on the critically acclaimed Watershed in 2008, Opeth entered their third decade with a formidable reputation and a huge international fan base. A sold out show at London‚Äôs legendary Royal Albert Hall (later documented on a special live album and DVD) signified that the band were now fully deserving of their status as true greats of the modern age.

And then in 2011, with typical audacity, they released their tenth album, Heritage. Although most fans were immediately entranced by the album‚Äôs daring reinvention of the Opeth sound, its contents were hugely adventurous and took the band ever further into an experimental realm that most of their contemporaries would never have even considered, let alone conquered with such breathtaking aplomb. Eschewing the death metal vocal style that had long been a part of their arsenal, √Ökerfeldt and his band mates were torching the rulebook once again. Yet more tours followed, including some jaw-dropping acoustic shows that threw fresh light on the whole Opeth experience, and despite a smattering of negative reactions from truculent purists, the Heritage era signalled a heartening revitalisation of a band now more than two decades old. And that glorious creative rejuvenation continues on the band‚Äôs long-awaited eleventh studio album, Pale Communion.

‚ÄúThe best way for me to write is always to just write the stuff that I want to hear myself,‚ÄĚ states Mikael today. ‚ÄúI‚Äôm pretty headstrong, so a few negative reactions to Heritage didn‚Äôt push me in any way. That album started something new. Every record feels like part of a chain. We wouldn‚Äôt have done Heritage without the previous records and the same is true of Pale Communion. I sat down and wrote the songs like I did for Heritage and the one before that. Heritage rejuvenated the band a little bit and I could see a way to continue doing this band without focusing on what we‚Äôre known for. We‚Äôd done that for so many records that I was a bit fed up with it. Now we have a future and Pale Communion is the continuation of that.‚ÄĚ

Yet another compelling evolutionary step and a consolidation of the foundations laid down on Heritage, Pale Communion is simply another sublime piece of sonic artistry from one of the greatest bands on the planet. From the skewed grooves and dazzling atmospherics of the opening Eternal Rains Will Come to the devastating orchestral sweep and melodic precision of the closing Faith In Others, it is an album that expands Opeth‚Äôs sonic palette beyond all measure while still retaining that mercurial essence that first made them such a unique proposition. As Mikael explains, Pale Communion is a record that came together intuitively and without compromise, driven forward by the magical chemistry between all five members of the band.

‚ÄúI would have to say that we‚Äôre happy band right now and there have been times when we weren‚Äôt happy,‚ÄĚ he states. ‚ÄúEveryone‚Äôs pulling their weight and it feels like a collective with the same ideas. We‚Äôve been touring a lot for the Heritage record, so we‚Äôre a tight unit. We hang out a lot as friends. We play well and we get along well and we have a mutual understanding of where we want to take this band. And I know the guys can play anything. They‚Äôre fantastic musicians. As I was writing the songs, Fredrik [√Ökesson, guitar] came down to my studio to lay down some solos. He was really involved in the process and listening to whatever I came up with. It was the first record for Joakim [Svalberg, keyboards] and he‚Äôs been really psyched about doing this record. Long before we started recording he was saying that he couldn‚Äôt wait to be involved, and he really stepped up to the plate. Axe [drummer Martin Axenrot] and [bassist Martin] M√©ndez are a tight unit too. Axe went over to Barcelona where M√©ndez lives to rehearse for a few days and then they put everything down in three or four days in the studio. It was easy. It was easy for everybody.‚ÄĚ

In keeping with Opeth‚Äôs oft-professed love of the classic rock, hard rock and progressive records of the early 70s, Pale Communion was recorded at the legendary Rockfield studios in Wales. Soaking up the atmosphere of the place where such immortal albums as Judas Priest‚Äôs Sad Wings Of Destiny and Queen‚Äôs Sheer Heart Attack were recorded 40 years ago, Mikael could hardly have found a more suitable location for the recording of his band‚Äôs new material.

‚ÄúI do like many records that were made there and it‚Äôs a legendary studio,‚ÄĚ he agrees. ‚ÄúWe like to pay homage to that stuff. The place where we made Heritage is famous for Abba recording there, for instance! But Rockfield was available, it was fairly cheap, it was a residential studio and they cooked for us! It‚Äôs right in the middle of nowhere so we know we wouldn‚Äôt be distracted by the city lights or pubs or whatever. That‚Äôs why we chose it. But then, of course, Sad Wings Of Destiny was recorded there so it can‚Äôt be complete shit! I think we could‚Äôve made a good sounding record anywhere, but the location and the logistics of being there were good for us.‚ÄĚ

While Heritage was a proud move away from the digitised uniformity of modern metal and into the beatific warmth of old school analogue, Pale Communion is an altogether sharper and more vivid representation of Opeth‚Äôs ongoing development. Overwhelmingly melodic and yet remorselessly diverse and unpredictable, these eight songs are as potent and mesmerising as anything in the band‚Äôs illustrious canon. From the exquisite ebb and flow of Cusp Of Eternity ‚Äď the first new song to be released into the wider world ‚Äď and the epic, menacing sprawl of the ten-minute Moon Above, Sun Below through to the throbbing instrumental perversity of Goblin (which, of course, was inspired by the Italian prog band of the same name), the lush, country-tinged harmonies and rhythmic rumble of River and the gorgeous strings and pin-sharp melodic thrust of Faith In Others (‚Äúthe best song Mikael has ever written‚Ä¶‚ÄĚ according to Steven Wilson), Pale Communion is another flawless triumph from a band that seem to still be gathering strength and gaining momentum. Who knows what the future will bring‚Ä¶

‚ÄúIt‚Äôll be our 25th anniversary next year and we‚Äôre 11 records in. We‚Äôll just see where it takes us, as always,‚ÄĚ says Mikael. ‚ÄúI hope people appreciate that we don‚Äôt play by the rules. I want us to be in a position where we‚Äôre accepted for what we are, and not what people want us to be. I guess we‚Äôre a rock band but we do a little bit of everything and that‚Äôs what I like about it. It makes it interesting and fresh for us as musicians to not be pigeonholed and to not be pure. It would be complete death for me as a musician to just do one thing. I admire bands that can do that, but are they true to themselves? Don‚Äôt they have any other influences? That‚Äôs quite impressive and probably harder than branching out. But we can‚Äôt do that. It‚Äôs impossible for us. I don‚Äôt know where we‚Äôre going next and that‚Äôs exciting to me.‚ÄĚ
http://www.opeth.com/